By Christina Macone-Greene, SPECIAL TO THE UNION-TRIBUNE 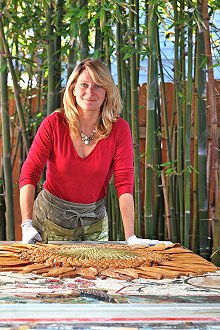 FALLBROOK — The new Fallbrook Library will be outfitted with distinctive artworks, including mosaic murals created by artist Betsy Schulz.

Schulz, known for handmade tiles and intricate mosaics, was brought onboard by the Fallbrook Library Building Task Force to create a mural at the entrance to recognize donors, and a mosaic mural in an outdoor reading garden.

“We saw other tile projects, but Betsy’s craft and skill is exceptional,” said Jerri Patchett, chair of the Library Building Task Force. “We are an arts educational community so art was a critical component to this library.”

Schulz, 42, who lives in San Diego and owns A Design Garden, started on both projects in May 2009. She’s nearly finished for an installation in November.

The 19,051-square-foot, $11.6 million building at South Mission Road at East Alvarado Street is scheduled for a grand opening in January.

The task force also commissioned nine other artists to create artworks for the library. Patchett said the group set aside $350,000 for the arts.

“We wanted the finest artists we could find locally and wanted different mediums,” she said. “Betsy is bringing a new art form of hand-sculpted tiles that we don’t have in Fallbrook.”

For the donor mosaic mural, Schulz wanted more than just plaques with names.

Schulz got her inspiration after visiting the Fallbrook Historical Society. The artwork, she said, represents the agricultural heritage of Fallbrook and historical reflections of its people and places.

“I wanted to have something interesting,” Schulz said. “For people who come to the library on a regular basis, they should be able to look at it and always see something new.”

Parts of the mosaic, such as an owl and avocado, are three-dimensional. The tiles, placed tightly together, give the appearance of a solid sculpture.

Schulz said it was important for her to involve the community. At the Fallbrook School of the Arts, more than 200 residents attended a workshop to help make tiles with inspirational words and phrases. They are part of the donor mural mosaic.

For the reading garden, Schulz created rural illustrations of native wildlife and plants that were sandblasted into the concrete wall enclosure. Sculpted tiles that spell out Chinese and Greek proverbs appear inside six recessed areas.

“My favorite part of this project is that the Fallbrook community is taking ownership of their public library,” Schulz said.

The original Fallbrook library opened in 1913 and was the first branch of the county’s public library system.

County supervisors approved spending $10.3 million for the new branch. The county will cover the bulk of the costs. Residents’ groups raised more money for the project.

Christina Macone-Greene is a freelance writer from Fallbrook.