Muralist’s living and working areas spread out among several buildings 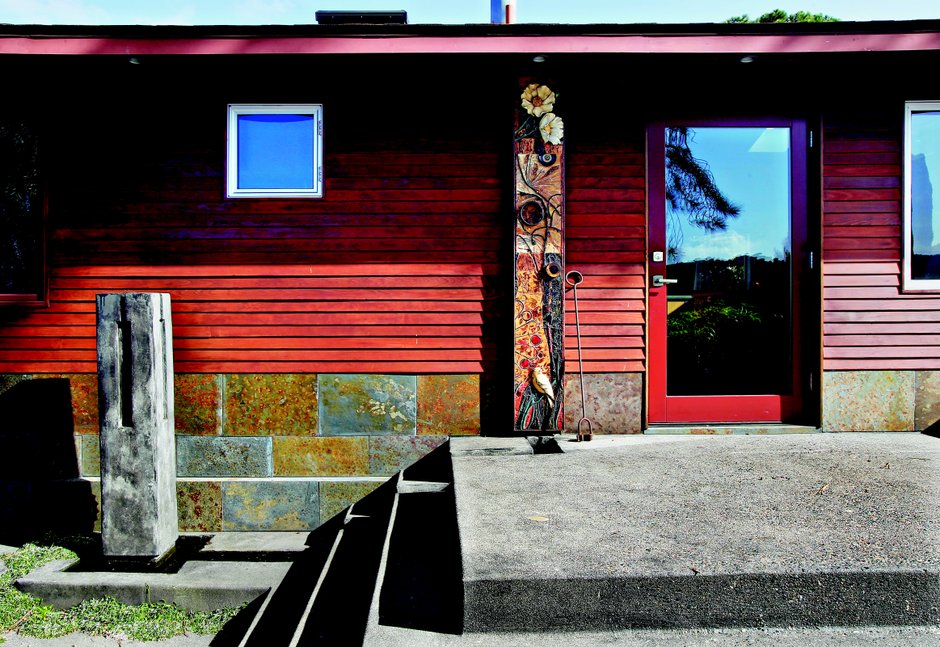 Most of the public art installations by ceramic muralist and landscape designer Betsy Schulz are remarkably personal – layered with found objects and tiles depicting the people who lived or worked in the communities her murals celebrate. So you might expect her own home to be chock full of her intricate tiles as well as the found objects she collects, such as old gears, rocks and bottles.

But that’s not the case for the interior spaces of her family’s compact, three-bedroom, three-bathroom home. A studio and three sheds also sit on the 7,200-square-foot lot in Del Mar that overlooks Los Peñasquitos Marsh and the Torrey Pines State Beach and Preserve.

“My work is so complicated and detailed, that for our house I want it very clean and I want it, I don’t want to say sparse, but without a lot of stuff,” said Schulz, whose Gateway Arches in Solana Beach won a 2006 Orchid Award from the San Diego Architectural Foundation.

In 2006, Schulz, her husband, Norbert Schulz, vice president of J.R. Filanc Construction Co., Inc. and her parents started to fix the dry rot and termite damage in the main house, a 1,000-square-foot wood structure that was moved to the lot in 1942 from either the nearby beach or the bluff (depending on the story). For two years, they gutted the interior of the house themselves, opening up the kitchen, living and dining space for a more modern feel; they also wanted to make the best use of the limited space.

“Between my husband and I, we designed it like a boat,” she said.

They used slate floors and bamboo cabinetry throughout the home (including the built-in bed and desk of her daughter’s tidy room overlooking the outdoor aviary). They brought in HanStone quartz for the kitchen counters and central island. One friend found a long, narrow oak table from a closed-down school for the dining area, while another donated a platform sectional sofa that fits perfectly below windows, which show off the marsh and ocean view.

The neutral palette and clean lines of the great room are the ideal backdrop for paintings by Schulz and her friends, including Sonia Devine, Lana Wilson and Irene de Watteville.

She did not use her own tiles in the bathrooms or kitchen, but she did one personal ceramic mural for the home next to the front door, which includes keys from the bottom of her family’s well in Pennsylvania, part of her grandmother’s plate, and tiles depicting the chickens in the backyard coop, tree frogs from the backyard pond and a Torrey Pine branch.

The gardens around the home and sheds are planted with experiments, of a kind. “I just have a menagerie of plants,” said Schulz, whose company A Design Garden also specializes in landscape design along the coast. “I tend to use my garden as a test. Everything I get for other gardens I put in here first.”

In the front yard, for instance, she is trying out a Del Mar manzanita, an endangered plant that required her to use the soil it had been growing in.

She laces natives with non-natives, plants supermarket orchids and supercool Gomphocarpus physocarpus and sows as many edible plants as she can, especially in the beds near the backyard sheds.

The sheds were on the lot when the couple bought the property in 1995, as was the garage they converted to Schulz’s studio (complete with kilns and glazing area). “We bought the house because we were looking for live/work/loft. They just don’t have anything like that unless you want to go downtown.”

When she needs to spread out her mosaics, Schulz can put tables down the driveway or in the courtyard off the main house and the studio. “I have a lot of neighbors and their friends who come and volunteer on the public projects. It’s almost like we have a little sewing circle or quilting bee, where they’ll come over and mosaic and talk.”

The courtyard allows the family to entertain, while the sheds provide storage and some private spaces. They call one the library because it houses flanks of bookshelves, as well as a guest bed and camping equipment. “I love it because it is a teeny space, and you usually think of a library as a huge space,” Schulz said.

Schulz likes having her living, working and family spaces spread out among several buildings but knows it’s not for everyone.

“It’s definitely an acquired living style,” she said. “Some people want everything in one house. I personally have to have a door to the outside no matter where I am. It’s not a phobia; it’s a preference…”

Sophy Chaffee is an Encinitas-based writer.